CD-R (Compact Disc-Recordable) is a digital optical disc storage format. A Blank CD-R disc is an empty compact disc that can be written once and read arbitrarily many times. CD-R discs (CD-Rs) are readable by most plain CD readers, i.e., CD readers manufactured prior to the introduction of CD-R. This is an advantage over CD-RW, which can be re-written but cannot be played on many plain CD readers.

The CD-R, originally named CD Write-Once (WO), specification was first published in 1988 by Philips and Sony in the ‘Orange Book’. The Orange Book consists of several parts, furnishing details of the CD-WO, CD-MO (Magneto-Optic), and CD-RW (ReWritable). The latest editions have abandoned the use of the term “CD-WO” in favor of “CD-R”, while “CD-MO” were used very little. Written CD-Rs and CD-RWs are, in the aspect of low-level encoding and data format, fully compatible with the audio CD (Red Book CD-DA) and data CD (Yellow Book CD-ROM) standards. (Note that the Yellow Book standard for CD-ROM only specifies a high-level data format and refers to the Red Book for all physical format and low-level code details, such as track pitch, linear bit density, and bitstream encoding.) This means they use Eight-to-Fourteen Modulation, CIRC error correction, and, for CD-ROM, the third error correction layer defined in the Yellow Book. Properly written CD-R discs on blanks of less than 80 minutes length are fully compatible with the audio CD and CD-ROM standards in all details including physical specifications. 80 minute CD-R discs marginally violate the Red Book physical format specifications, and longer discs are noncompliant. CD-RW discs have lower reflectivity than CD-R or pressed (non-writable) CDs and for this reason cannot meet the Red Book standard (or come close). Some hardware compatible with Red Book CDs may have difficulty reading CD-Rs and, because of their lower reflectivity, especially CD-RWs. To the extent that CD hardware can read extended-length discs or CD-RW discs, it is because that hardware has capability beyond the minimum required by the Red Book and Yellow Book standards (the hardware is more capable than it needs to be to bear the Compact Disc logo).

CD-R recording systems available in 1990 were similar to the washing machine-sized Meridian CD Publisher, based on the two-piece rack mount Yamaha PDS audio recorder costing $35,000, not including the required external ECC circuitry for data encoding, SCSI hard drive subsystem, and MS-DOS control computer. By 1992, the cost of typical recorders was down to $10,000–12,000, and in September 1995, Hewlett-Packardintroduced its model 4020i manufactured by Philips, which, at $995, was the first recorder to cost less than $1000.[1]

The dye materials developed by Taiyo Yuden made it possible for CD-R discs to be compatible with Audio CD and CD-ROM discs.

Initially, in the United States, there was a market separation between “music” CD-Rs and “data” CD-Rs, the former being several times more expensive than the latter due to industry copyright arrangements with the RIAA.[2] Physically, there is no difference between the discs save for the Disc Application Flag that identifies their type: standalone audio recorders will only accept “music” CD-Rs to enforce the RIAA arrangement, while computer CD-R drives can use either type of media to burn either type of content.

A standard CD-R is a 1.2 mm (0.047 in) thick disc made of polycarbonate about 120 mm (4.7 in) or 80 mm (3.150 in) diameter. The 120 mm disc has a storage capacity of 74 minutes of audio or 650 Megabytes of data. CD-R/RWs are available with capacities of 80 minutes of audio or 737,280,000 bytes (700 MiB), which they achieve by molding the disc at the tightest allowable tolerances specified in the Orange Book CD-R/CD-RW standards. The engineering margin that was reserved for manufacturing tolerance has been used for data capacity instead, leaving no tolerance for manufacturing; for these discs to be truly compliant with the Orange Book standard, the manufacturing process must be perfect .[citation needed]

Despite the foregoing, most CD-Rs on the market have an 80-minute capacity. There are also 90 minute/790 MiB and 99 minute/870 MiB discs, although they are less common (and depart from the Orange Book standard outright). Also, due to the limitations of the data structures in the ATIP (see below), 90 and 99 minute blanks will identify as 80 minute ones. (As the ATIP is part of the Orange Book standard, it is natural that its design does not support some nonstandard disc configurations.) Therefore, in order to use the additional capacity, these discs have to be burned using “overburn” options in the CD recording software. (Overburning itself is so named because it is outside the written standards, but, due to market demand, it has nonetheless become a de facto standard function in most CD writing drives and software for them.)

Some drives use special techniques, such as Plextor’s GigaRec or Sanyo’s HD-BURN, to write more data onto a given disc; these techniques are inherently deviations from the Compact Disc (Red, Yellow, and/or Orange Book) standards, making the recorded discs proprietary-formatted and not fully compatible with standard CD players and drives. However, in certain applications where discs will not be distributed or exchanged outside a private group and will not be archived for a long time, a proprietary format may be an acceptable way to obtain greater capacity (up to 1.2 GiB with GigaRec or 1.8 GiB with HD-BURN on 99 minute media). The greatest risk in using such a proprietary data storage format, assuming that it works reliably as designed, is that it may be difficult or impossible to repair or replace the hardware used to read the media if it fails, is damaged, or is lost after its original vendor discontinues it.

Nothing in the Red, Yellow or Orange Book standards prohibits disc reading/writing devices from having the capacity to read or write discs beyond the Compact Disc standards. The standards do require discs to meet precise requirements in order to be called Compact Discs, but the other discs may be called by other names; if this were not true, no DVD drive could legally bear the Compact Disc logo. While disc players and drives may have capabilities beyond the standards, enabling them to read and write nonstandard discs, there is no assurance, in the absence of explicit additional manufacturer specifications beyond normal Compact Disc logo certification, that any particular player or drive will perform beyond the standards at all or consistently. Furthermore, if the same device with no explicit performance specs beyond the Compact Disc logo initially handles nonstandard discs reliably, there is no assurance that it will not later stop doing so, and in that case, there is no assurance that it can be made to do so again by service or adjustment. Therefore, discs with capacities larger than 650 MB, and especially those larger than 700 MB, are less interchangeable among players/drives than standard discs and are not very suitable for archival use, as their readability on future equipment, or even on the same equipment at a future time, is not assured, even under the assumption that the discs will not degrade at all. 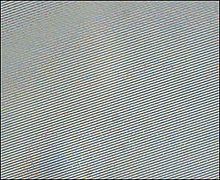 Photomicrograph of the groove in a CD-R disc

The polycarbonate disc contains a spiral groove, called the “pregroove” (because it is molded in before data are written to the disc), to guide the laser beam upon writing and reading information. The pregroove is molded into the top side of the polycarbonate disc, where the pits and lands would be molded if it were a pressed (nonrecordable) Red Book CD; the bottom side, which faces the laser beam in the player or drive, is flat and smooth. The polycarbonate disc is coated on the pregroove side with a very thin layer of organic dye. Then, on top of the dye is coated a thin, reflecting layer of silver, a silver alloy, or gold. Finally, a protective coating of a photo-polymerizable lacquer is applied on top of the metal reflector and cured with UV-light.

A blank CD-R is not “empty”; the pregroove has a wobble (the ATIP), which helps the writing laser to stay on track and to write the data to the disc at a constant rate. Maintaining a constant rate is essential to ensure proper size and spacing of the pits and lands burned into the dye layer. As well as providing timing information, the ATIP (absolute time in pregroove) is also a data track containing information about the CD-R manufacturer, the dye used and media information (disc length and so on). The pregroove is not destroyed when the data are written to the CD-R, a point which some copy protection schemes use to distinguish copies from an original CD.

There are three basic formulations of dye used in CD-Rs:

There are many hybrid variations of the dye formulations, such as Formazan by Kodak (a hybrid of cyanine and phthalocyanine).

Unfortunately, many manufacturers have added additional coloring to disguise their unstable cyanine CD-Rs in the past, so the formulation of a disc cannot be determined based purely on its color. Similarly, a gold reflective layer does not guarantee use of phthalocyanine dye. The quality of the disc is also not only dependent on the dye used, it is also influenced by sealing, the top layer, the reflective layer, and the polycarbonate. Simply choosing a disc based on its dye type may be problematic. Furthermore, correct power calibration of the laser in the writer, as well as correct timing of the laser pulses, stable disc speed, and so on, is critical to not only the immediate readability but the longevity of the recorded disc, so for archiving it is important to have not only a high quality disc but a high quality writer. In fact, a high quality writer may produce adequate results with medium quality media, but high quality media cannot compensate for a mediocre writer, and discs written by such a writer cannot achieve their maximum potential archival lifetime.

These times only include the actual optical writing pass over the disc. For most disc recording operations, additional time is used for overhead processes, such as organizing the files and tracks, which adds to the theoretical minimum total time required to produce a disc. (An exception might be making a disc from a prepared ISO image, for which the overhead would likely be trivial.) At the lowest write speeds, this overhead takes so much less time than the actual disc writing pass that it may be negligible, but at higher write speeds, the overhead time becomes a larger proportion of the overall time taken to produce a finished disc and may add significantly to it.

Also, above 20× speed, drives use a Zoned-CLV or CAV strategy, where the advertised maximum speed is only reached near the outer rim of the disc.[4] This is not taken into account by the above table. (If this were not done, the faster rotation that would be required at the inner tracks could cause the disc to fracture and/or could cause excessive vibration which would make accurate and successful writing impossible.)