DVD recordable and Blank DVD-R refer to part of optical disc recording technologies. DVD optical disc formats that can be recorded by a DVD recorder, (written, “burned”), either write once or rewritable (write multiple times) format written by laser, as compared to DVD-ROM, which is mass-produced by pressing, primarily for the distribution of home video. DVD recordable is a general term that refers to both write-once and rewritable formats, whereas DVD rewritable refers only to rewritable formats.

Like CD-Rs, DVD recordables use dyes. Depending on the intensity of the laser, the reflective property of the dye on a particular spot will determine whether it is a peak or a valley representation from pressed DVD. Dyes give the data side of a disc a distinct color. Dyes are also the reason playback is not guaranteed. Their reflective properties are not as good as with stamped DVDs that commonly have aluminum as the reflective layer.

The larger storage capacity of a DVD-R compared to a CD-R is achieved through smaller pit size and smaller track pitch of the groove spiral which guides the laser beam. Consequently, more pits can be written on the same physical sized disc. In order to write smaller pits onto the recording dye layer, a red laser beam with a wavelength of 640 nm (for general use recordable DVD, versus a wavelength of 780 nm for CD-R) is used in conjunction with a higher numerical aperture lens. Because of this shorter wavelength, DVDs use different dyes from CDs to properly absorb this wavelength. 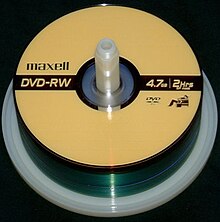 DVD-RW discs on a spindle

The “R” format DVDs can be written once and read arbitrarily many times. Thus, “R” format discs are suited to applications such as non-volatile data storage, audio, or video. This can cause confusion because the DVD+RW Alliance logo is a stylized ‘RW’. Thus, a DVD+R disc may have the RW logo, but it is not rewritable.

According to Pioneer, DVD-RW discs may be written to about 1,000 times before needing replacement.[1] RW discs are commonly used to store data in a volatile format, such as when creating backups or collections of files. They are also used for home DVD video recorders. One benefit to using a rewritable disc is, if there are writing errors when recording data, the disc is not ruined and can still store data by erasing the faulty data.

The DVD-R format was developed by Pioneer in 1997.[2] It is supported by most normal DVD players and is approved by the DVD Forum. Has broader playback compatibility than the “+” especially with much older players.[citation needed] The dash format uses a “land pre-pit” method[3] to provide ‘sector’ address information.

DVD “minus” R is not correct, according to DVD-R consortium recommendations; it is, in fact, a dash (i.e. DVD “dash” R). DVD-R and DVD+R technologies are not directly compatible, which created a format war in the DVD technology industry. To reconcile the two competing formats, manufacturers created hybrid drives that could read both — most hybrid drives that handle both formats are labeled DVD±R and Super Multi (which includes DVD-RAM support) and are very popular.

Developed by Philips and Sony with their DVD+RW Alliance. The “plus” format uses a more reliable bi-phase modulation technique[4] to provide ‘sector’ address information. It was introduced after the “-” format.

On 25 January 2008, DVD6C officially accepted DVD+R and DVD+RW by adding them to its list of licensable DVD products.[5]

DVD+RW supports a method of writing called “lossless linking”, which makes it suitable for random access and improves compatibility with DVD players.[6] The rewritable DVD+RW standard was formalized earlier than the non-rewritable DVD+R (the opposite was true with the DVD- formats). Although credit for developing the standard is often attributed to Philips, it was “finalized” in 1997 by the DVD+RW Alliance. It was then abandoned until 2001, when it was heavily revised (in particular, the capacity increased from 2.8 GB to 4.7GB).[citation needed]

Comparison of “dash” and “plus” formats[edit]

As of 2006, the market for recordable DVD technology shows little sign of settling down in favour of either the plus or dash formats, which is mostly the result of the increasing numbers of dual-format devices that can record to both formats. It has become very difficult to find new computer drives that can only record to one of the formats. By contrast, DVD Video recorders still favour one format over the other, often providing restrictions on what the unfavoured format will do.[7] However, because the DVD-R format has been in use since 1997, it has had a five-year lead on DVD+R. As such, older or cheaper DVD players (up to 2004 vintage) are more likely to favour the DVD-R standard exclusively.[8][better source needed]

There are a number of significant technical differences between the ‘dash’ and the ‘plus’ format, although most users would not notice the difference. One example is that the DVD+R style address in pregroove (ADIP) system of tracking and speed control is less susceptible to interference and error, which makes the ADIP system more accurate at higher speeds than the land pre pit (LPP) system used by DVD-R. In addition, DVD+R(W) has a more robust error-management system than DVD-R(W), allowing for more accurate burning to media, independent of the quality of the media. The practical upshot is that a DVD+R writer is able to locate data on the disc to byte accuracy whereas DVD-R is incapable of such precision.

Additional session linking methods are more accurate with DVD+R(W) versus DVD-R(W), resulting in fewer damaged or unusable discs due to buffer under-run and multi-session discs with fewer PI/PO errors.[9]

Like other ‘plus’ media, it is possible to change the book type to increase the compatibility of DVD+R media (though unlike DVD+RW, it is a one way process). This is also known as bitsetting.[10]

As RAM stands for Random Access Memory, it works more or less like a hard-drive and was designed for corporate back-up use. Developed in 1996, DVD-RAM is a rewritable optical disc usually encased in a cartridge. Currently available in standard 4.7 GB (and sometimes in other sizes), it is useful in applications that require quick revisions and rewriting. It can only be read in drives that are DVD-RAM compatible. DVD Forum backs this format.

Multi-format drives can read and write more than one format; e.g., DVD±R(W) (DVD plus-dash recordable and rewritable) is used to refer to drives that can write/rewrite both plus and dash formats, but not necessarily DVD-RAM. Drives marked, “DVD Multi Recorder” support DVD±R(W) and DVD-RAM.

DVD recordable media are sold in two standard sizes, a regular 12 cm size for home recording and computer usage, and a small 8 cm size (sometimes known as a miniDVD) for use in compact camcorders. The smaller Mini DVD-RW, for example, holds 1.46 GB.[11]

The following table describes the maximal speed of DVD-R and the relative typical write time for a full disc according to the reviews from cdrinfo.com and cdfreaks.com. Many reviews of multiple brand names on varying conditions of hardware and DVD give much lower and wider measurements than the optimal numbers below.

According to a study published in 2008 by the Preservation Research and Testing Division of the U.S. Library of Congress, most recordable CD products have a higher probability of greater longevity compared to recordable DVD products.[15]

DVD-R discs are composed of two 0.6 mm acrylic discs, bonded with an adhesive to each other. One contains the laser guiding groove and is coated with the recording dye and a silver alloy or gold reflector. The other one (for single-sided discs) is an ungrooved ‘dummy’ disc to assure mechanical stability of the sandwich structure, and compatibility with the compact disc standard geometry which requires a total disc thickness of about 1.2 mm. The sandwich structure also helps protect the layer containing data from scratches with a thick “dummy” disc, a problem with CDs, which lack that structure. Double-sided discs have two grooved, recordable disc sides, and require the user to flip the disc to access the other side. Compared to a CD’s 1.2 mm thickness, a DVD’s laser beam only has to penetrate 0.6 mm of plastic in order to reach the dye recording layer, which allows the lens to focus the beam to a smaller spot size to write smaller pits.

In a DVD-R, the addressing (the determination of location of the laser beam on the disc) is done with additional pits and lands (called land pre-pits) in the areas between the grooves. The groove on a DVD-R disc has a constant wobble frequency used for motor control, etc.

The recording layer in DVD-RW and DVD+RW is not an organic dye, but a special phase change metal alloy, often GeSbTe. The alloy can be switched back and forth between a crystalline phase and an amorphousphase, changing the reflectivity, depending on the power of the laser beam. Data can thus be written, erased and re-written.

In October 2003, it was demonstrated that double layer technology could be used with a DVD+R disc to nearly double the capacity to 8.5 GB per disc.[citation needed] These dual layer (DL) versions, DVD-R DL appeared on the market in 2005.

A specification for dual-layer DVD-RW discs with a capacity of 8.5 GB (8,500,000,000 bytes) was approved by the DVD Forum,[17] and JVC announced their development of the first media in the format in 2005.[18]However, manufacturing support for these rewritable dual-layer discs did not materialize due to costs and expected competition from newer and higher-capacity formats like Blu-ray and HD DVD.

A double-layer DVD+RW specification was approved in March 2006 with a capacity of 8.5 GB.[19] Manufacturing support for rewritable dual-layer discs exists today