Sapphire Radeon Nitro+ RX 570 8-GB 256-Bit GDDR5 DirectX12 Dual Fan Graphics Card has a massive cooling block slapped on top of it. And while the GPU is similar to that of the Radeon RX 470, a higher boost frequency will bring this card towards RX 480 performance levels. This affordable mainstream graphics card series will allow you to play your games in both the Full HD 1080P range as well as a handful of games in that WQHD (2560×1440) range. And all that at a rather reasonable price of roughly €235 / USD. This review is all about the Polaris refresh from AMD, a code-name indicative of the mainstream Radeon RX 580 series, The new GPU is basically the same as the Radeon RX 480, it however is fabbed with a 3rd generation 14nm process which is a little more refined. That results into a GPU that can be clocked and boosted a notch faster. As such yes, AMD is refreshing their lineup. Actually four new models are released:

We’ll talk a little more on all differences later on in the article, but the primary focus will be Radeon RX 570 and 580. Both the The Radeon RX 570 and 580 graphics card will be made available in 4 and 8GB versions, you will also see both reference and tweaked SKUs from the board partners. The GPU used in the 580 is based on Polaris 20 (XTX), an Ellismere (codename) GPU based on 4th generation GCN architecture.  For the RX 570 that would be a Polaris 21, which is based on the same GPU and is similar to the Polaris 10 based products last year. The GPUS are fabbed based on a 3rd generation 14nm FinFET+ process based. The Radeon RX 580 will push the product to just over 6 TFLOPS of peak performance, 5 TFLOPS for the Radeon RX 570. The fabrication process is more refined and this allows AMD to create better silicon with less leakage. As a result, the clock frequencies can go up.

Radeon RX 570
The Radeon RX 570 is able to boost towards 1244 MHz with a 1168 MHz base clock frequency. This SKU now is set at a 150W TDP with its 32 CUs (compute units aka shader clusters) x 64 shader processors per CU = 2048 shader processors). The cards will be available in predominantly 4GB but also 8GB versions and has 256-bit GDDR5 memory which offers an effective 7 Gbps / GHz.

The reference cards will use just one 6-pin power PEG (PCI Express Graphics) header to give the the card its power. The reference boards have a 6-phase VRM power supply design and display output wise includes DisplayPort 1.4 connectors and one HDMI 2.0b. AIB partners may release SKUs with a DVI connector as well, the reference PCB shows SMT traces for a DVI connector. Overall the specs show a very potent card to play the latest games with whilst offering a good memory size versus price in the 1920×1080 and even 2560×1440 monitor resolutions.  In this review we peek at the Radeon RX 570 Nitro+  from Sapphire, the card is fitted with 4GB of graphics memory and has been factory tweaked for you at a 1340 MHz Boost frequency with the memory at an effective data-rate of 7.0 Gbps. Being an Nitro+ model it has been fitted with a lot of metal, including a back-plate and obviously the massive cooler. The card is a dual-slot, dual-fan solution and for something mainstream certainly looks high-end.  Let’s start up this review, but not before you’ve had a peek  … 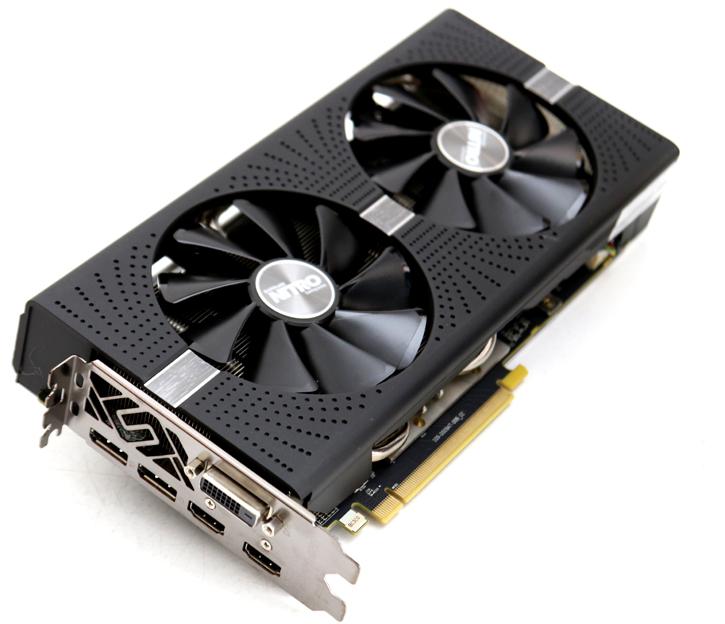 Alright so there she is, the Radeon RX 570 Nitro+ from Sapphire we received is an 4GB version (despite that box stating 8GB) with the Nitro+ dual-fan heatpipe slash radiator design cooler. It has two PCIe PEG power connectors (6-pin and 8-pin). The card has been designed to be a nice match for Full HD gaming, up-to 1080P and sure even some 1440P. 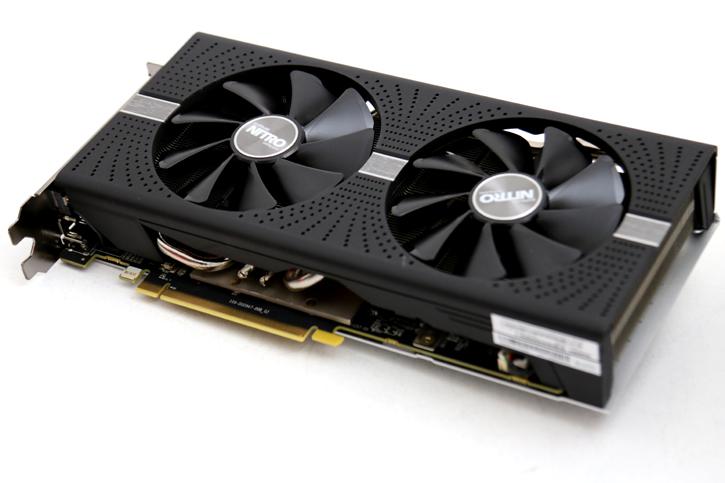 In our findings the card is roughly as fast as the Radeon RX 480, and at 259 USD with 4GB that’s not a bad position to be in. Obviously there’s more to check out other than performance, we’ll have a peek at PCB heat levels, GPU temperatures as well as noise levels. 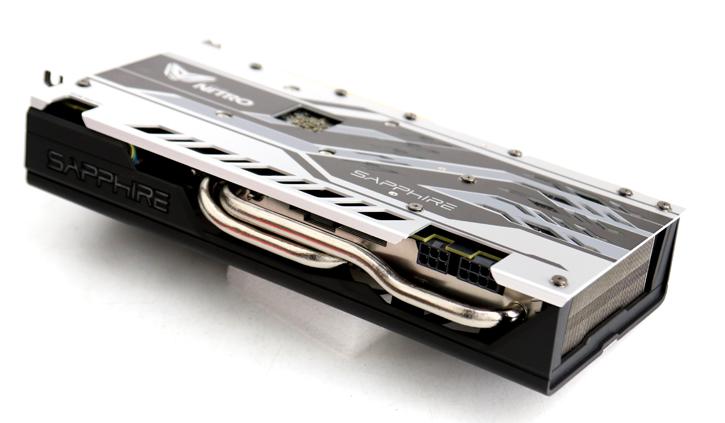 This Radeon RX 570 is armed with 4 GB graphics memory which will be clocked at 7.0 Gbps / 256-bit to give you a little more leash with the higher resolutions and image quality settings. The reference clocked product will run with clock frequencies up-to 1257 MHz on its 2048 shader processors with a 1340 Boost, this model remains at these reference values. Also, check out that backside where there is a thick sturdy metal back-plate with plenty of venting spaces applied as well. A proper one as well with lots of ventilation gaps. And kudos to Sapphire for an opening at the GPU PCB rear, that’s a proper vent for warm air. 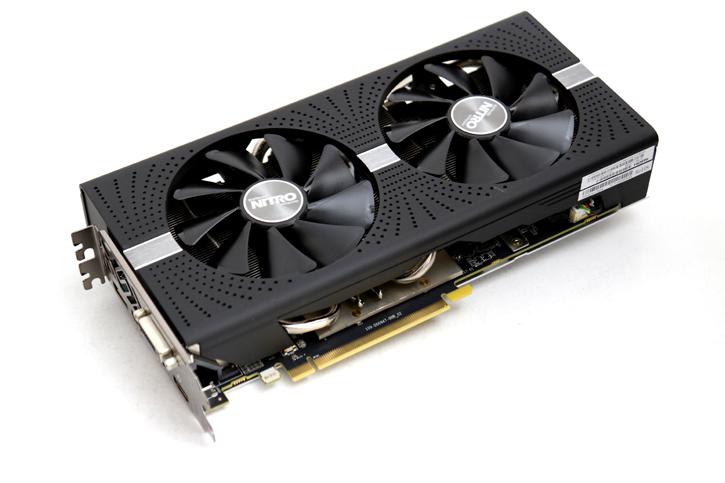 This product has been designed to be a match for the most popular Full HD and Wide Quad HD resolutions. Actually, it places a focus on 1440P gaming. The card includes includes two HDMI (2.0b), two DisplayPort 1.4 (HDR ready) connectors as well as a DVI connector.